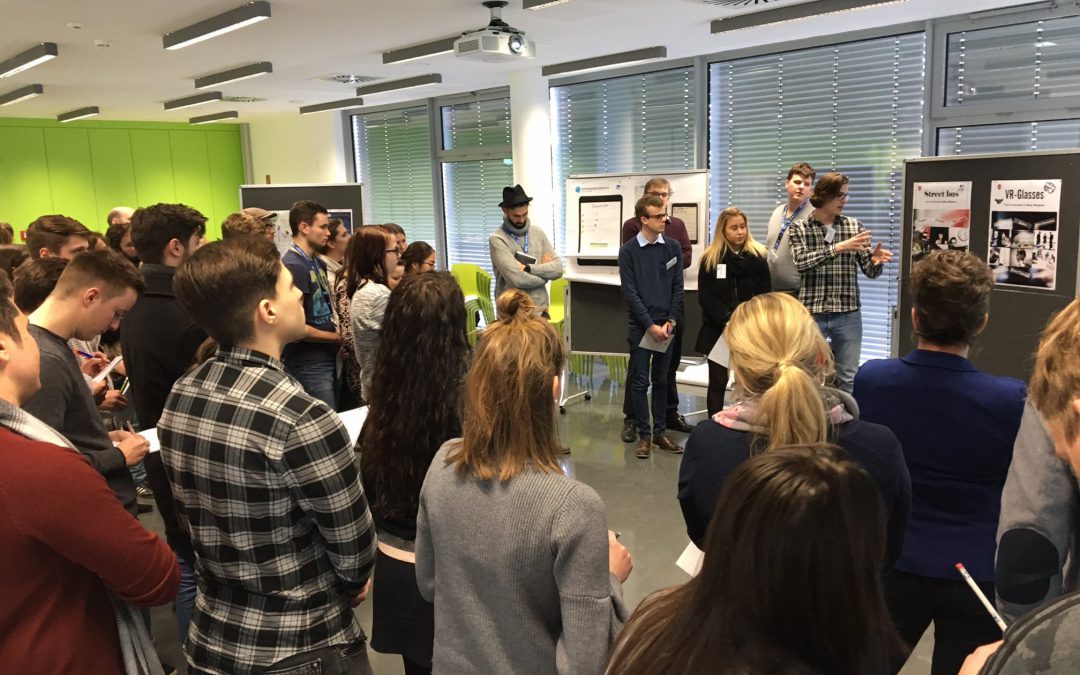 Principal Lecturer of Entrepreneurship at Karelia University of Applied Sciences

In March 2018 year I took participated to an intensive entrepreneurship education 2-week program at Technical University of Wildau. The event was organized by the ECMT+ project. Six students from each seven participating countries had had few months to prepare and produce rough business ideas ready for further development and testing during the intensive week. I was able to participate on the first week, during which teachers from partner universities gave lectures in the morning and student teams applied these lessons during the afternoon and evening. Because of the lessons and work done by the students, those rough business ideas sketches transformed in to a more thoroughly tested and complete business concepts.

This was my first time really experiencing Germany. My earlier experience consisted of flying from Helsinki to Munich, renting a car from the airport and driving south to Austria. Based on my 7-day stay at Wildau, I must admit that Germany felt simple and approachable. Trains are on time, streets are clean and feel safe. I think I didn’t spot any vacant commercial spaces in Wildau. (a sign of Germany’s strong economy?) Some curious cultural or practical differences also stood out: cash is everything; credit or debit cards are not often accepted in smaller shops. Shops close early and are not open during Sundays. Also, I got the sense that German organizational culture is somewhat more hierarchical compared to what I’m used to in Finnish universities. Obviously, flat and vertical structures both have their benefits. If you get too flat, it might be difficult to get coordinated collective action for any sustained period of time towards an important strategic goal. Which by the way is often the biggest issue with “creative” and “dynamic” startup teams.

What if the main benefit of an intensive week is less about the individual skill development and more about the relationships and the interactions between? We know that shared novel and exciting activities can be a significant factor in experienced relationship quality of couples (Aron et al., 2000). It is not farfetched to propose that novelty and excitement, such as the kind what you experience when you go to a foreign country to work and live together with people from different cultures, will be a good relationship builder also in non-romantical context. Thus fostering future collaboration and exchange of ideas. In fact, this exchange of ideas might the most important outcome of the intensive weeks, at least for the faculty and staff of the partnering universities. Alex Pentland and his research group at MIT have studied this so-called idea flow extensively (Pentland, 2015). Pentland defines an idea as three-part unit of knowledge: when in situation A, do B in order to get to C. When people interact and discuss, ideas flow between people. When we see others doing something in a situation similar to ours, reaching towards a goal like ours, we’re likely to imitate if this activity leads to the desired results.

With the advent of mobile devices it has become possible to study idea flow objectively. Pentland and his colleagues have discovered that idea flow is a mighty predictor of success. Intra-organizational idea flow predicts better productivity and effectiveness, while inter-organizational idea flow corrects with long-term success and innovativeness. For example the economic development of different US states is strongly correlated with the number of social ties to other states (Holzbauer et al., 2016).  It is also the increasing density of idea flow inside cities that explains the scaling of economic and innovation performance per resident in cities (Pan et al., 2013) .

So, how did I personally benefit from this idea flow in Wildau? Next are couple of ideas that stood out and certainly had an impact to my own thinking. First of these was an excellent demonstration of the “get out of the building” principle originally made famous by startup thinking pioneer Steve Blank (Blank & Dorf, 2012). As according to the “get out of the building” principle, already on the second day, students travelled to Berlin to interview and observe potential customers in hopes of discovering unsatisfied needs and other business opportunities. Students were also instructed to look for existing solution similar to the business idea they had chosen to develop further. A second trip to Berlin came later during the first week.

These excursions worked as excellent learning opportunities and as exciting relationship-building experiences (see above). For me this was maybe the best example of the “get out of the building” practice I’ve personally witnessed. It is very likely that this practice will be integrated to some educational programs we have here are Karelia UAS.

Second practice that stood out for me was the Vinn Lab, a prototyping and mockup building facility at Wildau. My personal experiences are more with “dirtier” prototyping machines such as woodcraft and metalcraft tools. Vinn Lab had a “cleaner” focus with 3D printers and simple CNC machines. What I liked especially was that together with these tools the facility had also amble room for brainstorming, dedicated computers with design software and simple building materials such as Lego bricks. It felt as if Vinn Lab was clearly organized around a specific need an innovator might have. To my estimation this need is the ability to quickly visualize business ideas as images or to produce them as simple 3D mock-ups. When a product or service idea becomes visual and physical, higher quality feedback can be gathered from outside experts and potential customers. Also, the designers themselves become aware of possible flaws and ways to improve the idea further. So-called dirtier prototyping facilities have a clearer focus on producing actual functioning prototypes. To summarize, Vinn Lab is something I feel we lack here in Joensuu.

How would I change the intensive week concept for our next implementation in 2019? Perhaps one way to improve would be to narrow the type of business models student teams can work with. If all would be working to create a physical product, it would make it easier for the teachers to design more effective learning experiences. Student teams could follow mock-up and prototype building and usability testing steps in an orderly fashion. To have even more focus, all teams could be developing a physical product to a similar kind of customer need. This would allow teachers and students alike to see performance differences between different teams and thus facilitate learning better. When everybody is working on a completely different business idea, the innovation skills might be lost in the practical details of the product or service.

Pentland, A. (2015). Social Physics: How social networks can make us smarter. Penguin.